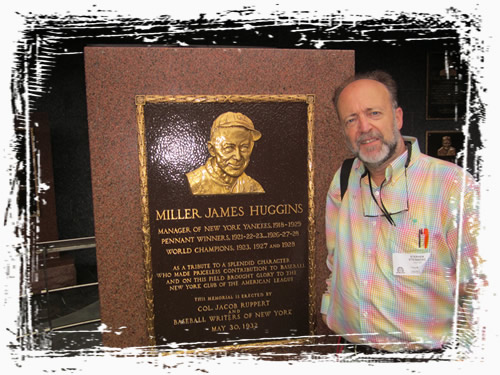 Steve and Lyle Spatz are pleased to announce their second collaborative book, The Colonel & Hug. This is the story of New York Yankees' owner Colonel Jacob Ruppert (1915-1939) and Yankees' manager Miller Huggins (1918-1929), which will be published by the University of Nebraska Press in spring 2015, the 100th anniversary of Ruppert's purchase of the Yankees. Nebraska Press also published our award-winning book, 1921.

The Ruppert-Huggins partnership laid the foundation for future Yankees' greatness. Both men are dim figures from the past, often overlooked. From 1918 to 1929, they repositioned the Yankees to become and remain the nation's dominant sports franchise for the rest of the 20th century. They created a model for successful sports franchises of the modern era. They also had more than a little help from arguably the greatest and most charismatic man to ever play the game, Babe Ruth.

While both men are always mentioned in books on the Yankees' history, neither has had a book devoted to him. It is no coincidence that in their decade of the 1920s together, the lowly and losing Yankees became winners, capturing six American League pennants and three world championships. Both men were small of stature, yet they became giants of the game. They had an unassailable mutual trust and loyalty to each other. The Colonel and Hug tells the story of how these men transformed the Yankees. Never far from the story is the team's star on the playing field, Babe Ruth.

Ruppert, owner of the Ruppert Brewery, was committed to winning and spending the money to do so. Huggins, the little manager of the St. Louis Cardinals, was a keen student of the game and sharp judge of talent. In his early years with the Yankees (1918-1922), the cerebral Huggins had many critics in the press, among the fans, and even in his clubhouse. Ruppert stuck with his skipper and was rewarded with an organization and tradition that continued to succeed after Huggins's untimely death in 1929.

This was an era of significant change in baseball. The end of the low-scoring Deadball Era and the emergence of a long-ball style of play, the collapse of baseball's governing body (the National Commission), and the scandal of gambling and fixed games were forces in which Ruppert, Huggins, Ruth, and the Yankees played significant roles. The Colonel & Hug also focuses on a time of enormous change and upheaval in America (1918-1929). From the Great War to the Roaring Twenties, from Prohibition and anti-immigrant nativism to a loosening of moral values, complex and sometimes contradictory forces of society are never far from the surface.

As with 1921, this book will include engaging looks at a colorful cast of characters, as well as rare and revealing photographs. Most of all, The Colonel & Hug reveals two men who had an unwavering commitment to excellence, to the Yankees, and to each other.

"The Day John McGraw Lost Control of his Teamand Quit"

New York Giants manager John McGraw ran his team for 30 years with a heavy hand, in his legendary autocratic style. Yet on one remarkable afternoon in October 1916, he lost control of his team and quit.

The Giants had just come off an amazing 26-game winning streak, yet they were virtually out of the pennant race when they finished the season against Wilbert Robinson's Brooklyn Dodgers. The Dodgers (known as the "Robins," for their lovable manager, "Uncle Robbie") were fighting the defending NL champions, the Phillies, for the 1916 pennant. Many of the Giants players wanted Robbie, their former coach, to win. They played a very strange game against Brooklyn on October 3. What was the story behind the farcical game New York "handed" to Brooklyn? It involves a broken friendship, gambling friends, and even Arnold Rothstein.

Steve's article appears in the Fall 2012 issue of Base Ball, A Journal of the Early Game

Horace Fogel: The Man who Knew (and Talked) Too Much"

The corrosive influence of corruption and gambling on the National Pastime existed well before the Black Sox scandal of 1919. Yet Organized Baseball made concerted efforts to keep scandal from the public eye. Steve tells the story of Horace Fogel, the president and part-owner of the Philadelphia Phillies. When he raised these issues and wanted to meet them head on, he was run out of the game. Even after he was banished late in 1912, the baseball establishment went to incredible lengths to silence him. Hugh Fullerton, a lone voice about the 1919 World Series fix, was a rare Fogel supporter. This is the story of Horace Fogel's desperate and ultimately futile battle to clean up the game and the obstacles he faced. When the Black Sox scandal broke in September 1920, Fogel surfaced and was vindicated when his spectacular story of gamblers and attempted fixed games was verified.