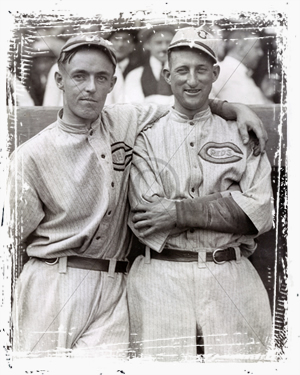 Camaraderie among teammates has always been part of the National Pastime. Here are Cincinnati Reds pitchers Dutch Ruether and Slim Sallee. In 1919 they combined for 40 wins (against only 13 losses), as the Reds won the National League pennant and went on to defeat the Chicago White Sox (later to be known as the Black Sox, for the eight players who conspired with gamblers to lose the Series) in the World Series.
View larger photo

Ford Frick was the Commissioner of Baseball from 1951 to 1965, after serving as President of the National League since 1934. In the 1920s, he was a New York sportswriter. In this July 2, 1924 article in the New York Evening Journal, he writes about the importance of experience in one key position: Pitcher.

Baseball ordinarily is considered a game of youth. Youthful ambition, youthful enthusiasm, the pliancy and endurance of youthful musclesthese, we say, are a part of baseball essentials. Consider, then, the statement of Sam Jones, Yankee pitcher. It all happened in a fanning bee in the hotel here [Philadelphia] a few days ago. The argument centered about baseball and baseball doings, and youth was given its play.

Then came Sam with the statement: "All great pitchers are old pitchers. Pitching," Sam declared, "is a matter of experience. Hundreds of youngsters come up to the big leagues with 'lots of stuff.' They have a great fast ball, a good curve, all the attributes of a high class pitcher. But they lack experience. And they go in there and are batted all over the lot.

"They don't know batting weaknesses, and they haven't had the experience which teaches them how to pitch. That comes with years. Youth, in pitching, is a liability, particularly when youth means immature judgment and a lack of essential experience."

Sam illustrated his point. And he illustrated it effectively, merely by pointing out the great pitchers of today. Alexander, Stanley Coveleskie, Bob Shawkey, Herb Pennock, Dazzy Vanceon and on down the list. All of them comparatively old, all of them past the age when men are supposed to attain their greatest baseball effectiveness. But all of them are great pitchers todaybetter, perhaps than they were ten years ago in the days of their extreme youth.

Back through baseball records the fact holds. Brown, Plan, Bender, Coombs, Mathewson, White, Donovanall of these reached their greatest mark around thirty. Waite Hoyt, another great pitcher of today, is young in years but old in baseball experience.

"All great pitchers are old pitchers."

An unusual statementbut a statement that is borne out by fact and backed by investigation. Look it up yourself. A team may boast its youthful phenom in the infield or the outfield. It may boast its great hitters or great catchers who are new to the game.

But when you hear of an all-star pitching staff you know without investigation, that it is a veteran staff. Sam made another interesting statement, too. And it was this: "If I were to make selection today of the greatest pitcher in the American League I wouldn't hesitate a moment. I have my candidate picked out. He is Howard Ehmke of the Boston Red Sox.

And most of the players agreed with Jones. Ehmke, they declared, had every asset of pitching greatnessand best of all, his fine points were his pitching judgment and his pitching motion. Ehmke is no youngster. He has been in the league a long time. Two years ago he was considered through. Now he is, by admission of the players themselves, the greatest pitcher in the American League.