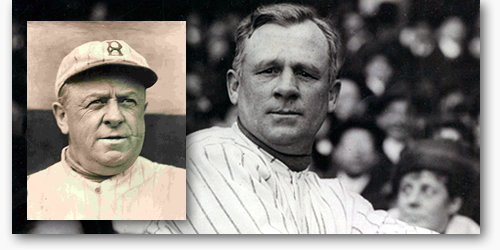 Successful managers have widely varying styles. Two of the greatest managers of the early 20th century, Connie Mack and John McGraw, for example, had contrasting ways of leading. There is no one “magic bullet.” Damon Runyon explores this subject on February 24, 1916.

Salve, says our reliable old friend Noah Webster, is a substance to be applied to wounds or sores. Also, he remarks, it is smooth talk or flattery. Mr. Webster makes no mention of the fact, but salve has come to be rather an important ingredient of our national pastime, to wit baseball.

It has come to be part of the managerial equipment of quite a number of the team leaders of the present era. As a substance to be applied to the wounded or sore feelings of our diamond athletes, these team leaders are finding a liberal use of salve productive of good results.

These salvers must not be confused, as a managerial cult, with the Salters of baseball. The Salvers are a newer sect. The Salters have long endured. They are the managers who believe that the proper remedy for the raw or aching surface of athletic sensibility is salt, well rubbed in. Salve soothes, and salt smarts, but it must be confessed that up to date the Salvers have not attained the baseball the successes of the Salters. There must be something in salt.

The Salvers might otherwise be denominated the Coaxers. The Salters are the Drivers. Of the one cult we have today in the big league a total of eight members. Of the other cult we have eight. It is fifty-fifty on the membership, but the Salters have an edge when you commence figuring baseball success on a basis of pennants won.

In the stormy days of the Baltimore Orioles, the good nature and the soft words of Your Uncle Wilbert often formed a buffer between the fury of the ball tossers and the wrath of the gesticulators. Squatted in the shade of the hickories, Your Uncle Wilbert was wont to pour the balm of soothing language through his mask upon the burning feelings of some poor umpire as the Orioles snapped verbal lashes at the umps from every angle of the diamond.

Youre doing all right, Your Uncle Wilbert would say, consolingly.Dont pay any attention to them. That fellow at third base is crazy anyhowmeaning John J. McGraw, no less. Afterward, when Your Uncle Wilbert went to the Giants in the capacity of coach, there was added to his duties the task of spreading the salve. It was Your Uncle Wilbert who kept the Giants cheered up during a couple of bitter pennant drives, and who coaxed work out of pitchers who seemed to be temperamentally swamped. A bluff old boy with a heart in him as big as a watermelon, few sulkers can withstand the blandishments of Your Uncle Wilbert for any length of time.

He is quick to sympathize with his ball players when they make mistakes; he rarely has a sarcastic or cutting world for them, and he can get about as much work out of a sulker as any manager in the business.

Connie Mack is a salver, but he has a different line of salve from Your Uncle Wilbert. Connie is not bluff and hearty, like Robbie. He is grave and serious, and very patient. His attitude toward his ball players is rather fatherly than otherwise. With very young players of marked temperament he is perhaps the most successful of all the managers, for his salve is a gentle, unctuous salve.

Wild Bill Donovan is also a Salver, as we have said but Wild Bill lacks the development of either your Uncle Wilbert or Connie Mack. Wild Bill by nature is a light-hearted, laughing critter and his gaiety is transmitted to his players; but he is occasionally prone to impatience, of which Connie Mack is never guilty, and occasionally he drops into bitter reproof, which your Uncle Wilbert never does. He is a Salver, but as yet his salve is often mixed with a little mustard. Jimmy Callahan, new manager of the Pittsburgh Pirates, is much the same wayordinarily good-natured, but subject to periods of ire.

Clarence Rowland, of the White Sox; Bill Carrigan, of the Red Sox; and Lee Fohl, of the Cleveland club, are salvers of the new school, while Pat Moran, of the Phillies, is one of the old-timersa man much on the order of Your Uncle Wilbert.

John J. McGraw has been regarded as strictly a driver in handling a ball club, but McGraw is temperate in his methods compared to some. Frank Chance was the original Simon Legree of team leaders, especially during his reign over the Yanks. Chance drove with invective at all times, and some of the men who played with him here probably feel to this day the bite of the things that Chance said to them.

Chance held that when a ball player joined a big league club he should not have to be taught any baseball, and he had no patience with the erring young pastimers. Salve was about the last thing Chance would think of in handling a ball club.

Salve also is foreign to the medical chest of John J. McGraw, but McGraw has a way of encouraging his players by a few words of praise. Maybe it is because they are so few that they are all the more appreciated, but that McGraw has plenty of patience is shown by his tedious efforts with many young players, and by the way he has overlooked certain glaring mistakes.

Stallings is a strange combination of driver and coaxer. He is probably more of the driver, especially on the field, but out of baseball hours he can distribute salve by the acre. He is a raving nut on the bench and the gentlest soul in Christendom off the field.

Clark Griffith, Miller Huggins, Joe Tinker, Hughey Jennings, and even Fielder Jones, must be figured more in the salter class than among the salvers, while Charley Herzog, last of the playing managers and graduate of the McGraw school, is all driver. Some of those named in this paragraph are not Frank Chances, perhaps but neither is they Wilbert Robinsons. They might properly be classed somewhere just in between, but in the main they are addicted to salt rather than salve.