Features: A New Defense Against Ruth

A New Defense Against Ruth 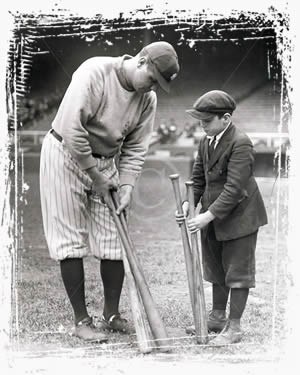 When was the first time a team made a radical rotation switch against a batter? Sid Mercer writes about this notable "first" in the New York Evening Journal on July 27, 1920. Ed Barrow, manager of the Boston Redo Sox (and soon to become business manager of the New York Yankees) had just pulled the move against Babe Ruth.

"The Yanks departed last night in temporary disgrace. They failed to score for the second time this season and had a trio of pitchers soundly spanked. It was a good getaway game because the customers may be able to forget it by the time the Yanks return from their Western trip.

"In this game occurred one of the most remarkable infield distortions ever seen. When Babe Ruth went to bat in the eighth inning the Red Sox left the left side of the diamond and left field almost unprotected. Evidently Manager Ed Barrow evolved this scheme of defense, figuring that Ruth could not hit to left field if Jones, the Boston pitcher, kept the ball 'inside' for Ruth.

"In order to tighten the meshes of the infield net for Ruth, Shortstop Scott moved over to the right side of second base, and Foster, who played second base, stationed himself about midway between first and second bases. Thus the Red Sox had three infielders guarding the space between first and second. Vitt, the third baseman, played in the shortstop's position, just a trifle closer to third base, perhaps, than is customary.

"This was the first time anybody had ever seen a shortstop playing on the wrong side of second base, and the customers rooted for Ruth to hit one down the open left field alley. Menosky, the left fielder, had swung well over to centre [sic], and Schang and Hooper were also out of position. Only by hitting a ball so hard that it could not have been handled could Ruth have driven a grounder through the centre or right side of that infield.

Unfortunately he was not permitted to hit, and so Barrow's strategy still remains open to question. Jones walked the big fellow four times. After the fourth inning he could have pitched to Ruth, as the Red Sox hen had a safe lead and Ruth came up only once with a runner on base. The fourth pass was handed out to insure a shutout game for Jones."