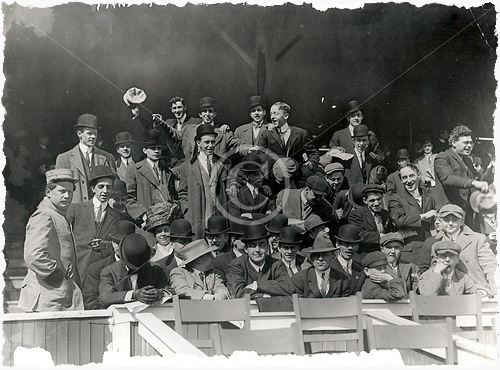 Here are some fans at New Yorks Polo Grounds in Upper Manhattan in 1911. Note how well-dressed they are. There were virtually no women in the bleachers, and most men wore hats.

The Polo Grounds was the home of the New York Giants. Starting in 1913, the New York Yankees relocated from Hilltop Park to the Polo Grounds, where the Giants were their landlords.
View larger photo
Photo Credit: Steve Steinberg Collection

With the arrival of Babe Ruth to New York in 1920, the New York Yankees' attendance surged past that of John McGraw's New York Giants. One of McGraw's tactics to offset Ruth's popularity and regain the hearts of New Yorkers was to sign a Jewish player. In this July 21, 1923 column in the New York Evening World, McGraw discusses his quest for a Jewish hero and his reasons for doing so.

Today I would give $100,000 for a Jewish player who even had the prospect of becoming a real star. It is not generally know, but I have had scouts looking for this man for the past five years. I have scoured the country without success, but I still have hope. I have tried out a number of candidates. In fact, I am working with a youngster now.

From the tone of a few inquiries it appears that there is a belief in some minds that baseball managers are prejudiced against Jewish players. To those who know the facts such a thought is laughable. I have several reasons for wanting one, the main being that I have never yet seen a Jewish player who was not unusually ambitious. Jewish players are never mediocre. As soon as they realize that they can never reach the top they usually withdraw form the game and go into some other profession, where they felt there is a better chance of the goal.

Another reason is that fifty percent [?] of the patrons of baseball, especially in New York, are Jewish, and for years they have been hoping for one of their faith to be a member of the Giants. That is but natural. The failure to develop one, though, has never dampened their enthusiasm for the game, not in the least.

Jewish people always have been great lovers of sport, as far back as the days described by Gen. [Lew] Wallace of Ben Hur. They have developed gladiators, boxers, wrestlers, football players and golfers. It is odd, at that, to see so comparatively few in big league baseball.

Can you imagine what an influence it would have on our game if we had two Jewish ballplayers rivaling each other as Benny Leonard ["the Ghetto Wizard," World Lightweight boxing champion, 1917-1925] and Lew Tendler [whom he battled in two great fights] rival each other in boxing?

Always there has been a sort of racial rivalry among the Irish, the French, the Indians, the Germans, the Cubans, the Poles and others for superiority in baseball. The Reds, for instance, boast a team of all nationalities. With the Jews taking an active part in such athletic rivalry baseball would be, indeed, the great melting pot of sport.

The greatest catcher, next to Bresnahan, that I have known during my active years as a manager was Johnny Kling. Johnny is a Jew, but so great was he as a catcher for the Cubs that many never thought to inquire as to his religion or faith. Another comer is Sammy Bohne of the Reds, Sammy [Ike] Samuels of the St. Louis club, as was Ed Stein. Right at the moment Bohne is the only Jew I can recall in either major league.

The only reason I can give for the scarcity of Jewish players is the great care the parents exercise over their boys for business or professional careers. Many of them develop unusual athletic ability at college and undoubtedly would become star ball players. The parents, though, influence them not to let anything interfere with their mental training for the future.

That Jews naturally love the idea of combat is indicated by the number of them who take up boxing. It is that very spirit, that man to man rivalry, that has made me seek a good Jewish player for my club. The $100,000 offer still holds good.

It might be inferred that I seek commercial popularity for my club by these efforts. Naturally, any club wants commercial popularity, but in baseball the only road to popularity is to win. A losing team does not draw, regardless of what players are on it. If I can get a star player to help me win, whether he be Jew or Christian, the popularity will take care of itself.

Two months after this article appeared, McGraw purchased Mose Solomon from the Hutchinson [Kansas] Wheat Shockers, where Solomon was hitting .421 with 49 home runs. The New York press dubbed Solomon "the Rabbi of Swat" and "the Jewish Babe Ruth." In eight at bats for the Giants late in the 1923 season, Solomon had three hits. But Solomon was a liability in the field and never appeared in another major-league game. His career batting average of .375 and slugging percentage of .500 remain as testament to his two-game flirtation with big-league fame.