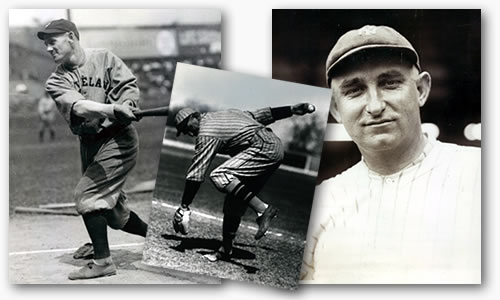 Ray Chapman of the Cleveland Indians is the only major league ballplayer to die on the field, when he was hit by a ball thrown by Yankees' pitcher Carl Mays, in August 1920. A few years earlier, on July 19, 1913, Sporting Life wrote about dangers of being hit by a pitch and quoted sportswriter Grantland Rice on the providence that "bean balls" haven't wreaked more havoc.

"In the New York 'Mail' the other day Editor Grantland Rice cited an astonishing fact, which seems to have seldom, if ever, obtruded itself upon writers or student of the game, namely, the amazing immunity of major league batsmen to fatal injury. The point is made as follows:

"'The beaning of Bobby Byrne by Joe Wood recalls the wonder that a campaign could ever drift by without at least one ball player being pushed into the league of fast sleep by a pitched ball. In the major leagues alone each season there is an average of 1,200 ball games played-600 in each circuit. In these 1200 games each slabman averages about 115 pitched balls to the game, or 230 for both clubs. This yield nets about 276,000 pitched balls a season, and just why some contender in front of this mighty fusillade isn't killed is one of the marvels of the profession. Any number have been badly hurt, but in the last 10 years, with over 2,000,000 pitched balls to face, no big leaguer has suffered a fatal mishap.'

"This immunity from fatality is probably due to the fact that major league batsmen by sheer agility usually evade the full force of a pitched ball, even when they cannot quite avoid being hit. This matter of being hit by pitched ball is a distressing, but seemingly ineradicable, part of the game, not only owing to the many cases of injury, but also to the after-effect alike upon the pitcher and the batsman. A pitcher who seriously injures a batsman usually loses some degree of his effectiveness, for long or short period following the accident, owing to nervous apprehension of repetition; while an injured batsman, from precisely the same nervous apprehension, suffers a decline in batting power. With most batsmen, however, this wears away, but there are many instances of record where exceptionally powerful batsmen never recovered entirely from 'gun shyness' and consequently had their major league careers prematurely shortened. Next to expert skill superior physical courage is the chief requisite and asset of a high-class major league player."