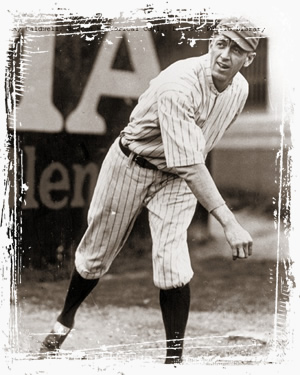 Ray Caldwell A pitcher of immense talent, the Washington Senators once offered to trade the great Walter Johnson for him, even up (in the winter of 1915-16). The ace of the New York Yankees of the mid-'teens, Caldwell won 37 games in 1915-16, despite missing a significant amount of playing time.

Yet he never came close to realizing his talent. Sportswriter Fred Lieb wrote of him, "He was one of the playboys of his time. Caldwell loved baseball, but he loved the high lights better." He made a comeback with the 1920 world champion Cleveland Indians, one of three 20-game winners on that staff.