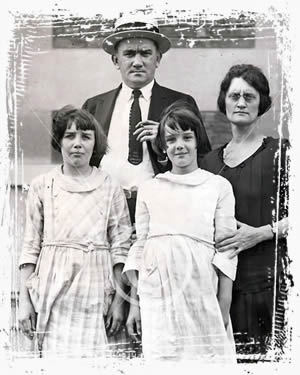 Spitball pitcher Phil Douglas was one of the heroes of the 1921 World Series. The alcoholic pitcher was banned from baseball for life less than a year later. While on a drinking binge, he wrote a compromising letter to a former teammate, in which he offered to leave his New York Giants in exchange for the goods. In this poignant summer of 1922 photo, the talented pitcher faced an uncertain future in which he could no longer provide for his family playing baseball, which he did so well. Ironically, he won the 1922 AL Earned Run Average title after his banishment.