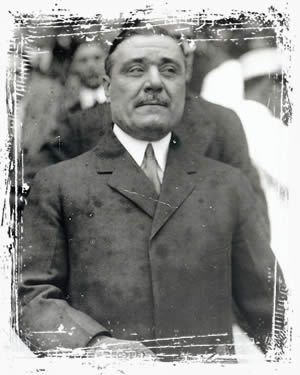 Jacob Ruppert bought the New York Yankees in early 1915, along with Til Huston; each owned 50% of the team until Ruppert bought him out in 1922. The Yankee owners took risks to build a winner: they took on American League President Ban Johnson in 1919 in order to secure star pitcher Carl Mays, they bought Babe Ruth for $100,000 at the end of that year, and invested in a new ballpark in 1922 (Yankee stadium opened in 1923.)

To Rupperts credit, he did not pay himself dividends from his baseball team and instead plowed all the profits of the Yankees back into the franchise. This is all the more remarkable because Rupperts primary source of income (other than the Yankees) was his brewery, and Prohibition really shut that business down for more than a decade, starting in 1920.

Ruppert is shown here at the Yankees home opener in April 1915, shortly after he and Huston bought the club. Mayor John Puroy Mitchel (the Boy Mayor) is about to throw out the ceremonial first ball.